What is the difference between Pottery and Ceramics? The Technical Definition of Ceramics

So let’s take a moment to begin and talk about the technicalities behind ceramics.  Ceramics, at the very core of it all, involves a couple of things, and they are as follows:

Now let’s take an example.  you’ve got some clay, and you put some water on it.  Well, essentially, it will start to disintegrate when the dried object is put in water, or it will start to become smaller when you fire it as well.  At certain temperatures in the kiln, it actually starts to dissolve and change, and in some ways, it creates a glass form.  That’s at the very core of ceramics.  You’re changing something from one form to another. Most of the time, clay does fall into the realm of the ceramic material, but of course, you also have glazes too, which do change when you fire them. If you read up on glazes, you’ll find out that they have a lot of differences, and when they get fired, it can manipulate the different elements inside of there.  Silica carbide, for example, works with the heated temperatures, and it can create a vast change in the overall state of the pottery and the texture it has.

So, ceramics involves changes, and they can include the following:

Pottery involves the changes that are made in the clay.  While pot can mean any old container, usually pottery involved well, making pots initially.  Both pottery and pot come from old English, which means “to push something.” With pottery, you’re in a sense pushing, or “throwing” your clay in order to create the shapes, which is how pottery got the name that it does.  Pottery can be used to make various items, usually along the lines of the following:

Some say figurines fall into this, but that’s a bit debatable. Usually, it’s on the pottery side of the things, rather than decorative figures. Lots of times in industrialized places, there are two different types of pottery that you often see, and they involve the following:

Usually the former involves being made in bulk, while the latter involves a singular unique piece that is made by a craftsman to show off.

You also may have heard of studio pottery, or also called studio ceramics.  This actually involves lots of things, and usually, it’s the following:

It still sits under pottery since many times, it involves creating a lot of pots, mugs, and the like. But, some people criticize it because it doesn’t involve much uniqueness since you’re mass-producing similar elements.  It focuses on full functionality, and you can get some sculptural items, but lots of times, these are pieces that are often made in bulk and are good to have if you want to have a lot of the same thing.

Usually, if you’re planning on being commercial with pottery, this is the way to go, and it’s something that allows for a lot to be made in a small amount of time. However, some people prefer to just get art pieces of focus on being an artist, because it actually involves doing more unique pieces. But remember, lots of times, they’re one-offs if you do go this route, which means if you make it once, it probably won’t be made again. Some people like that though, because it involves more uniqueness, and there is personal pride in only having one singular piece.

One element that we haven’t discussed yet, is slipware.  This is essentially where you put a slip onto a leather-hard body of clay, either with dipping, splashing, or painting.  Lots of times, this is a suspension, and because of it, it creates different colors.

Now, this type of ware actually falls under the ceramics definition, and that’s because of the following:

However, if you’ve ever heard the term slipware pottery, it kind of almost contradicts itself because it’s pottery, but also a form of ceramics because you’re using something other than clay to decorate this since it’s an aqueous suspension used in these clay bodies.  It involves clay in a sense where you’re putting it on a piece of pottery, like a pot, but it’s also a form of ceramics in a sense because of what it does to the body as well. It’s used to create different images at times too, and it’s a popular form of decorating, but just know that it involves kind of the mixing of both of these forms together.

It’s an old technique seen in different ancient cultures, including Romans, the ancient Africans with the red slipware, and other types of figurines.

Lots of times slipware is put on in different ways, and you can even use it with different types of decorating material.

In modern slipcasting, it actually involves more of the ceramic elements, including the following:

So yes, slips are great because they involve using both, but it’s important to understand that it does involve both, and they’re used together in an effective manner.

So now that you know about both, let’s highlight the differences between each of these.

The difference is What They’re Made Of

When it comes to understanding the difference, it can be hard because of lots of times, they’re used interchangeably in shops and such.  History itself actually makes these two appear the same, but they’re not.  it’s something that was used by people for thousands of years in their home, and even in the common places where it’s made, people don’t know the difference.

Well, one of the ways to tell the difference is what they’re made of, and we will discuss that difference here.

Now ceramics, often involves a couple of different things, and they are as follows:

This is a huge thing.  Now, both of these tend to use clays at the bottom of it all, but usually, the ceramics element of this actually involves other parts of it, including the following”:

With ceramics, these compounds actually change when you heat them up into something else.

Wheels are another big difference when you’re looking at the two. With pottery, you use something called a pottery wheel, and in this, it creates the following:

The wheel is an integral part of pottery, and really if you’re making anything on the wheel itself, you usually are using this. Now, how do you make ceramics then? Well, lots of times you can use different kinds of means, including the following:

Some people like to put the wheel as a part of this, but it’s often seen as different things, and it’s quite interesting.

Now, the oldest ceramics done is actually pottery.  that’s because the ancient people used this in order to create bowls and pots to use when you’re at the dinner table and to eat.  However, ceramics became something different over time, and it definitely does involve a few new differences.

Ceramics involves different elements, and they are as follows:

While pottery mostly works in the sense of creating bowls and such for foodstuffs, nowadays, ceramics are used in so many different ways, that there are so many different means to help change simple pottery into something more.  In essence, ceramics involves a multitude of chemical changes. 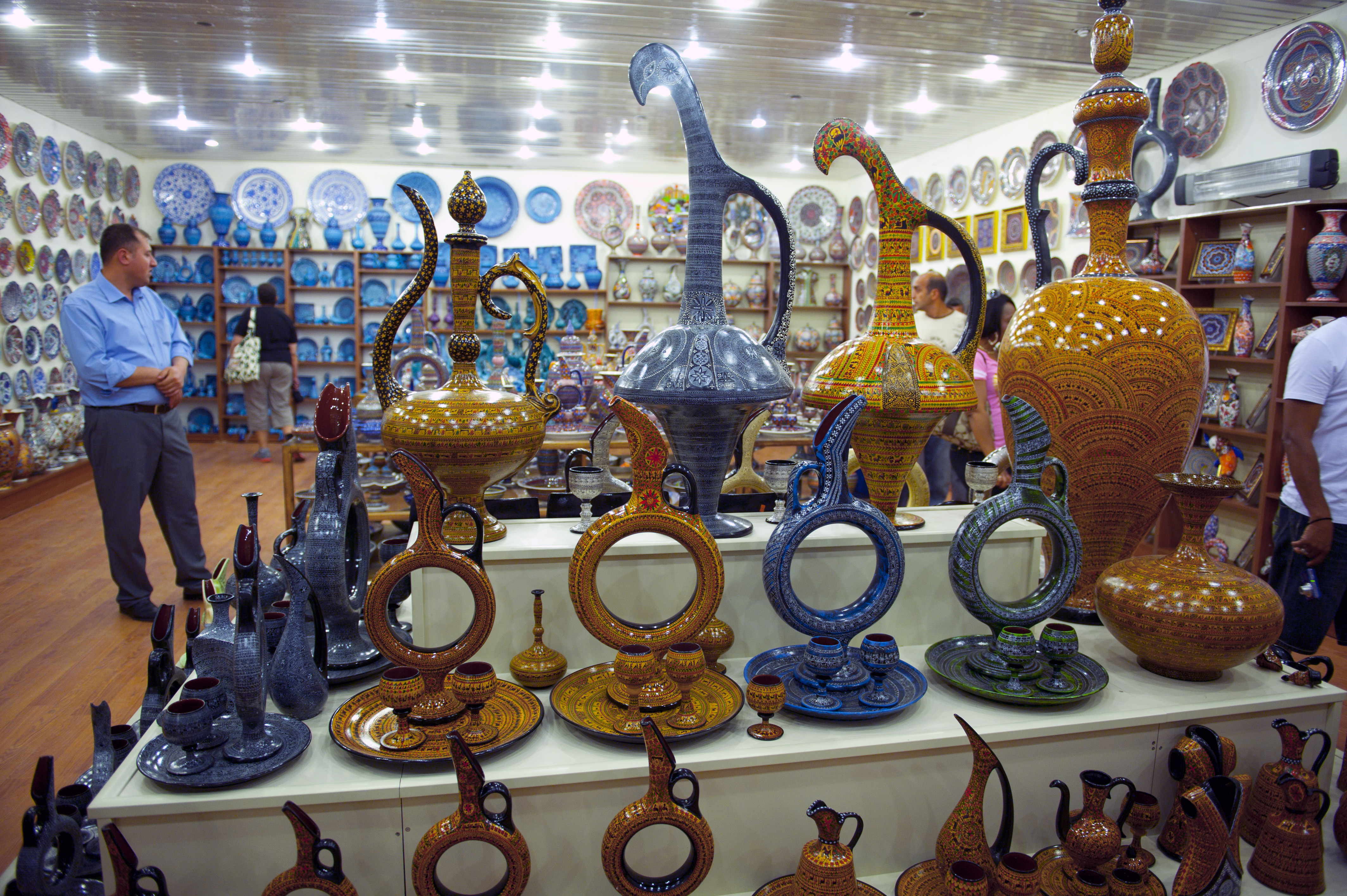 Some of them can include the following:

There are so many different things you can make out of this type of clay that in essence, if you’re making something that isn’t a pot, you’re basically doing ceramics.  That’s a huge difference between the two. Now pottery, you’re only limited to the pot form.  If you’re making a planter to throw your new flowers in, well guess what, you’re making pottery, not ceramics.  It’s a bit more limited, and while pottery is used for a long time and still uses that terminology if you’re going to get technical unless you’re making a pot, you’re actually doing ceramics and not pottery.

With pottery, you’re only working with clay, but if you’re going to be doing ceramics, here are a few other items that you can use:

There are a lot of things you essentially use.  Ceramics is much broader, and it involves more changing materials into something that you can use.  Ceramics usually have a lot more techniques added to it as well, whereas pottery is really just the clay being made into well, a pot.  With this, you’ll be able to do a lot more with ceramics.

The thing with ceramics, however, is the fact that you can, in essence, use them interchangeably in the world, and most wouldn’t know the difference. If you talked to a potter and they said that you used the wrong term, that’s one thing, but usually, the average person on the street doesn’t know the difference, so if you don’t want to get too technical, you honestly don’t have to.

But, there are more differences obviously. Look at the materials that you’re going to use, try some of the different kinds of things that you can incorporate, and you’ll be able to create some great elements that will allow you to have a nice understanding of the two, and know of the difference between each of these as well.

What About Ceramic Shops

you may have heard the term called ceramic shops.  This usually involves using the term “paint your own pottery” and then it involves painting different things.  Well, ceramic shops usually are similar to what you used before, and the difference is, in what they provide.  In essence, ceramic shops do involve both, but here are a couple of differences.

Understanding most of the time these are used interchangeably is important, because lots of times, people don’t understand the difference, so when they got to the shop they’re totally confused.

What About Sculpting clay?

One area that we haven’t really touched is sculpting clay, and it involves the following:

Now, this is more of a decorative element, but since it isn’t involving pots, it’s labeled under ceramics.  Usually, this starts to get used interchangeably at times, but in all technicalities, if you’re creating a three-dimensional piece of art, and not something that’s a bowl or a mug, but an actual figure, it involves ceramics more than pottery.  Usually, sculptural work isn’t done in studio pottery either, and usually, it’s more of an artistic medium than anything.

Here are a couple of important aspects to look at when you start to look at the difference between each of these, and they are as follows:

But, even with all of these differences, you’ll probably notice that they’re used interchangeably.  Lots of times, if you can get away with it, it isn’t a problem.  Here are the general terms used for each:

As you can see, there are a lot of definitions here, but understanding the difference is essential, and you’ll be able to fully comprehend what each of these means in a simple, yet accurate manner. Knowing full well what you want to get from this will help you get the difference nailed down relatively easily.  It’s a bit confusing, and a little bit complicated, but once you do understand, you’ll be able to get the benefits of this in no time.

Pottery and ceramics are usually used interchangeably. by many, and few know the difference. But, this post told you exactly what the difference is, why it matters, and a lot of different parts to this. It may seem like a lot, but once you sit down and understand it, you’ll be able to really get the most from your pottery adventures. Plus, you’ll feel happy knowing the difference, and seeing the intricacies of each, and why they’re different, and why it’s important not to mix these two up when it comes to using this type of medium.