What is Ancient Greek Pottery?

As a pottery enthusiast, I have been asked a lot of questions regarding Greek pottery and I believe as a beginner, you need to know a few things about the Greek pottery. Ancient Greek Pottery dates back 1000 to c. 400 BC. The ancient pottery provides some of the most distinctive vase shapes from antiquity and some of the oldest and most diverse representations of the cultural beliefs and practices of the ancient Greeks. The ancient pottery of the Greeks is important and relevant in the pottery world because of the intrinsic beauty of its forms and decoration and for the light, it sheds on the development of Greek pictorial art. This pottery is the main source of information about the process whereby Greek artists gradually solved diverse problems of representing three-dimensional objects and figures on a flat or curved surface. The Greeks used their ancient pottery pieces mainly to store, transport, and drink liquids such as wine and water. Smaller pottery pieces were used as containers for perfumes and unguents. There were several vessels produced locally for every day and kitchen use, yet finer pottery pieces from regions such as Attica were imported by other civilizations throughout the Mediterranean, such as the Etruscans in Italy. Irrespective of the artistic and historical value of ancient Greek pottery, the vast majority of Greek pottery pieces, despite now being dusty museums, they were meant for everyday use.

Obviously, Pottery is made from clay but Ancient Greek pottery is made from a special type of clay. The clay (locally called “keramos”) to produce greek pottery (“kerameikos”) was readily available throughout Greece, although the finest and most sed clay was the “Attic clay”. Attic clay is characterized by its high iron content giving an orange-red 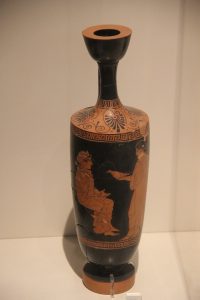 color with a slight sheen when fired and the pale buff of Corinth. The clay was generally prepared and refined in settling tanks so that different consistencies of material can be achieved depending on the vessel types to be made with it.

According to the history and Wikipedia, after the pot is made the potter paints it with an ultra-fine grained clay slip; the paint was applied to the areas intended to become black after firing, according to the two different styles, i.e. the black figure and the red figure. For the decoration, the vase painters were using brushes of different thicknesses, pinpoint tools for incisions and probably single-hair tools for the relief lines.

A series of analytical studies have shown that the striking black gloss with a metallic sheen, so characteristic of Greek pottery, emerged from the colloidal fraction of an illitic clay with very low calcium oxide content. This clay slip was rich in iron oxides and hydroxides, differentiating from that used for the body of the vase in terms of the calcium content, the exact mineral composition, and the particle size. The fine clay suspension used for the paint was either produced by using several deflocculating additives to clay (potash, urea, dregs of wine, bone ashes, seaweed ashes, etc) or by collecting it in situ from illitic clay beds following rain periods. Recent studies have shown that some trace elements in the black glaze (i.e. Zn in particular) can be characteristic of the clay beds used in antiquity.

The pottery wheel is significant equipment used in making ancient Greek pottery. The clay is then kneaded by the potter and placed on a wheel. Once the clay is on the wheel the potter can shape it into any of the many shapes shown below, or anything else he desires.  Greek pottery was made in separate horizontal sections: the foot, the lower and upper body, the neck, and finally the handles, if necessary. These sections were then joined together with a clay ‘slip’ after drying and in many cases, the print or logo or stamp of the potter is found inside the pottery piece. The piece will then be put back on the wheel to smooth the join marks and add the final shaping. Therefore, all ancient Greek pottery pieces were unique and the small variations in dimensions reveal that the use of simple tools and not cut-out templates were the norm. If you are a beginner, you can always get a cheap pottery wheel from amazon by clicking here. Firing Greek pottery is a little bit different from what we have now today. Unlike today’s firing process, Greek pottery was only fired once although it involved a sophisticated process. The black color effect was achieved by changing the amount of oxygen present during firing. This was done in a process known as three-phase firing involving alternating oxidizing -reducing conditions.

To make the black color effect on ancient greek pottery pieces, the following steps/stages are involved.

Greek pottery has some of the most distinctive, influential, and beautiful pottery shapes and ceramic designs of antiquity in the world. Not only that, but Greek Pottery has also given us a window into the lives, practices, and beliefs of people long gone and of whom we very often have no contemporary written record. Best Air-Drying Pottery Clay to Use

How To Do Pottery With a Twist. Use of Extruders in Creating Twisted Pottery.